Sometimes for a variety of reasons it becomes necessary to try and figure out which gateways are paired to which management servers and unfortunately this is a configuration that can often slip under the radar when documenting a management group.

Luckily there is a simply way to figure this out without having to log on to each server and trawl through the registry.

Note: this command has changed slightly from past versions of SCOM

Something that I find is often missed with a SCOM deployment is putting in place the recommended AV exclusions. Not having these in place can cause issues in your environment.

Note: Paths are examples, amend drive letter as required for your environment.

Important When a directory that is to be excluded has a directory name greater than 8 characters long, add both the short and long directory names of the directory to the exclusion list. These names are required by some AV programs to traverse the subdirectories.

This is an important read to prevent potential future issues.

This posting will be part of my SCOM basics series and covers the key concepts of Objects and Classes.

An object is the basic unit of management in Operations Manager. An object typically represents something in your computing environment, such as a computer, a logical disk, or a database. It could also represent something more abstract, such as an application, an Active Directory domain, or a DNS zone. An object can also be referred to as an instance of a particular Class.

A class represents a kind of object, and every object in Operations Manager is considered an instance of a particular class. All instances of a class share a common set of properties. Each object has its own values for these properties which are determined when the object is discovered. 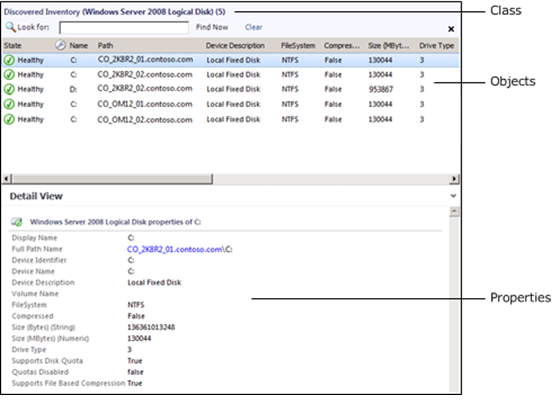 Classes have two further categories. Base Classes and Hosted Classes

Every class in Operations Manager has a base class. A class has all the properties of its base class and could add more. All of the classes from the different management packs installed in your management group can be arranged in a tree with each class positioned under its base class.

Most classes are hosted by another class. When one class hosts another, the hosting class is called the parent, and the class being hosted is called the child. Instances of the child class cannot exist without a parent.

I’ve included groups in this posting because it can be a common mistake to try and use a group as a target for a rule / monitor this can cause that rule / monitor to not function correctly as the class for a group only exists on a management server, the group will not be enumerated into it’s members from the target selection.

I came across a recent article by Marnix Wolf and S.Carrilho regarding a little known SQL setting known as Max Degree of Parallelism (MDoP)

When SQL Server runs on a computer with more than one microprocessor or CPU, it detects the best degree of parallelism, that is, the number of processors employed to run a single statement, for each parallel plan execution. You can use the max degree of parallelism option to limit the number of processors to use in parallel plan execution.

This becomes an issue on servers with hyper-thread enabled processors, as by the nature of hyper-threading the system thinks that there are more cores available then there physically are.

This setting can be found under SQL Server advanced properties: 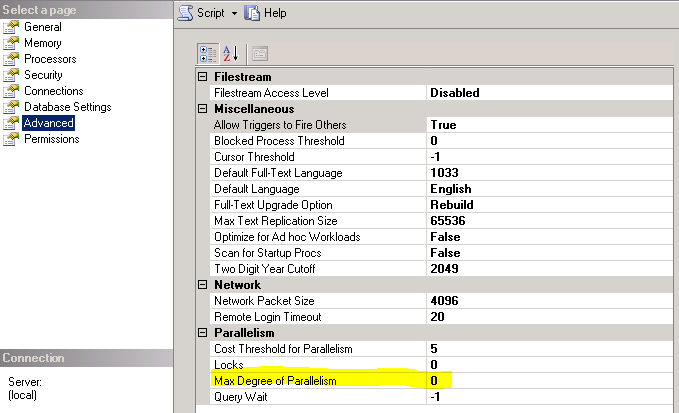 In order to calculate the recommended value for this setting we need to use the MDoP calulator which makes use of two queries:

1. Output of following query from the SQL Server instance:

3. Input these value into the calculator:

In this example the SQL query returned a value of 1 and the PS returned a count of 4 cores, the calculator recommends an MDoP setting of 4.

I’ve had situations in the past where no amount of tweaking seemed to improve console performance and this certainly a factor I will be taking into account in the future. Definitely give Marnixs’ article a read as he covers the topic in more detail with additional findings from his field experience.

There are other ways to improve console performance, I will combine them together in a future blog post about complete console tuning.

I often find it interesting, particularly among younger engineers how little emphasis is placed on this icon

, discussions usually center around phrases like “it’s only one grey agent” and there is little urgency in fixing that agent.

I use one agent as my example because what does that one agent really mean. Well it of course does depend on each environment and requires some understanding of the clients business. For example it’s the end of the month and

is the payroll server, or perhaps you are supporting a web based business such as an online retailer and

is their web front end. Management servers may be the heart and soul of Operations Manager but without the lifeblood of the agents you don’t have much to work with.

Below is a diagram of the data flow from the agent to the management server and from there through to the Ops and DW databases.

I posted an article earlier in the year about agents not submitting performance data that shows how to pickup agents that may not be working even if they show green in the console. It just emphasises that just because agents look like they are working it doesn’t mean they are 100%

Hopefully this article helps to raise awareness of the importance of

Kevin Holman recently published a great article about the inherent pitfalls of importing a management pack into an environment without understanding the intended scope, scalability, and any known/common issues.

Specifically he discusses the Dell  Hardware Management Pack (Detailed Edition) which has a small scalability limitation of 300 agents.

The lesson to learn here is – be careful when importing MP’s.  A badly written MP, or an MP designed for small environments, might wreak havoc in larger ones.  Sometimes the recovery from this can be long and quite painful.   An MP that tests out fine in your Dev SCOM environment might have issues that wont be seen until it moves into production.  You should always monitor for changes to a production SCOM deployment after a new MP is brought in, to ensure that you don’t see a negative impact.  Check the management server event logs, MS CPU performance, database size, and disk/CPU performance to see if there is a big change from your established baselines.

Go here for the full article, definitely worth the read.

I came across a great article on TechNet which is essentially a compilation of useful SCOM information, it includes everything from the basics and key concepts, to deployment guidelines and information on how to configure and use different features.

This is definitely one to keep in your favorites

Go here for the full article

A while ago I had an issue at a customer where their SCOM console would experience huge performance degradation at random intervals.

This is a slow and complex situation to troubleshoot which is why I am glad to see a comprehensive and well laid out Troubleshooting plan from Marnix Wolf.  This is a must read to better understand the areas that can impact your SCOM environment performance and more importantly your user experience, as people don’t want to use a console that’s slow.

Something I’ve noticed, being exposed to a variety of SCOM deployments, is that in quite a few cases Management Packs are installed and never looked at again. Generally this seems to stem from either the engineer looking after the environment doesn’t know any better or is perhaps too cautious to perform an update but there may be other specific reasons such as client restrictions.

Never the less it is good practice to check all of your management packs regularly, I’d say at least once a month, to see if any updated versions are available.

In my experience once you have found a new version of a particular MP has been released it is always a good idea to download the MSI from the relevant site instead of using the wizard. This is because if a new management pack has been added to the package that wasn’t there in the previous version then you will not detect it as an update for an installed Management Pack.

If you have management packs not available through the catalog then they unfortunately need to be checked against the latest version at the vendor site manually.

Remember: If possible always test before deploying a new version of a management pack, if you don’t have access to a lab then an alternative is to keep an eye on community blogs and sites like System Center Central and MP Wiki, to see if any issues crop up.

If you have a good method for keeping your management packs up to date leave a comment.