Update Rollup 2 for SCOM 2012 R2 has been released and is availible for download here.

The update fixes the following issues:

Issue 2
Adding multiple regular expressions (RegEx) to a group definition causes an SQL exception when the group is added or run.

Issue 4
Service Level Objectives (SLO) dashboards sometimes load in several seconds and sometimes take minutes to load. Additionally, the dashboard is empty after it loads in some cases.

Issue 5
Operations Manager Console crashes when you try to override the scope in the Authoring pane.

Issue 6
The System Center Operations Manager console is slow to load views if you are a member of a custom Operator role.

Issue 7
This update rollup includes a fix for the dashboard issue that was introduced in Update Rollup 1.

A while ago I had an issue at a customer where their SCOM console would experience huge performance degradation at random intervals.

This is a slow and complex situation to troubleshoot which is why I am glad to see a comprehensive and well laid out Troubleshooting plan from Marnix Wolf.  This is a must read to better understand the areas that can impact your SCOM environment performance and more importantly your user experience, as people don’t want to use a console that’s slow.

A new version of the PKI Certificate Verification management pack has been released by Raphael Burri, version 1.2.0.210 is exclusively for SCOM 2012 and contains the following changes:

One of my customers still running SCOM 2007 R2 asked if it would be possible to monitor the availability of their 3 sites so that they could track any outages during the month. The below will also work with SCOM 2012.
Each site has a primary and backup connection and the site is only unavailable if both links fail.

First with the network teams assistance I identified and discovered the Routers and Interfaces responsible for the line connections into each of the sites. Then I create a distributed application for each specific site: 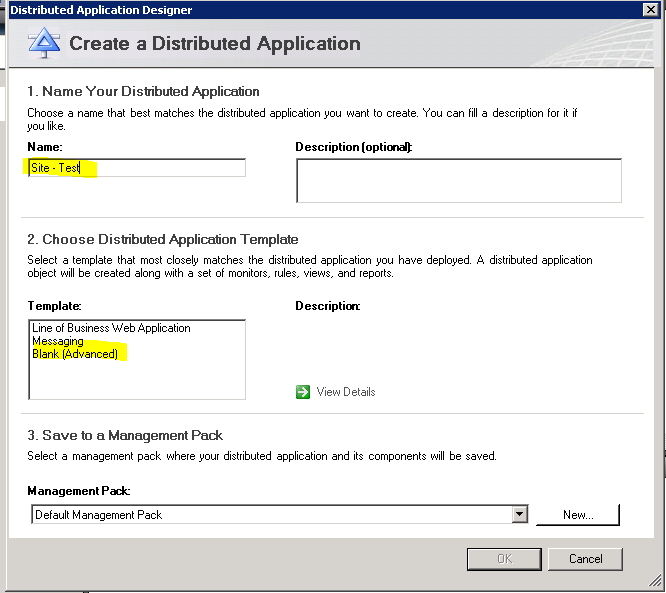 Scope your container to Device

Search for the site routers discovered earlier and add them to the container.

Save and open Configure Health Rollup

Now because the site is only unavailable in the event of both links failing, set the Health Rollup to “Best Health State of any Member” this will ensure that the DA stays green if even 1 Router is still contactable.

Below is what you will see in your Distributed Application view.

Here is a sample of an availability report using the DA for a particular site.

If you have another way of achieving this result, I’d be interested to hear about it, drop me a mail or leave a comment.

Silect has released the SP1 version of their MP Author tool.

It is a free product which enables wizard driven management pack authoring which means you no longer have to be a developer to create a Management Pack.

Go to http://www.silect.com/mp-author for more information.

“Complex. Multi-layered. Too many unnecessary rules and monitors. Applications without management packs. We get it. But you don’t have to be a developer anymore to build your own System Center Operations Manager management packs (MPs). With MP Author you get to be the author, designer and the developer. Our intuitive and intelligent wizard-driven designer lets you build completely new MPs or even customize existing MPs for single or distributed applications—without needing XML skills. And best of all, it’s FREE.” – Silect

Here is a quick overview of each release of SCOM and the related version code:

You can check your core version by running the following query against your OpsDB.
select DBVersion from __MOMManagementGroupInfo__

Have a look at the version of your SCOM component files such as HealthService.dll to determine your UR / CU level.

Stefan Roth has written a great article on how to overcome some of the issues evolved with configuring SNMP monitoring in SCOM 2012. He covers the requirements as well as includes a step-by-step in order to avoid making the mistake of choosing the incorrect SNMP version.