If, like me, you have tried to add company knowledge in SCOM 2012 you may have run into a few errors.

In my case it was “Visual Studio 2010 Tools for Office Runtime is not installed.”

Here is a great article from SatyaVel on how to get knowledge editing to work (http://blogs.technet.com/b/momteam/archive/2012/10/10/how-to-get-knowledge-editing-to-work-in-operations-manager-2012-with-office-2010.aspx)

Steps below are for my record:

Step 3: Reboot the OpsMgr Console machine. Note there is not prompt in the VSTO setup requiring you to reboot but this is something you have to do otherwise it will not work.

There appears to be an issue when trying to discover certain SQL 2008 instances with SCOM. Which is related to MOF data not being registered in the WMI repository correctly when SQL is installed.

The error that you will see in your Operations Manager event log is:

DiscoverSQL2008DBEngineDiscovery.vbs : The Query ‘select * from SqlService where SQLServiceType =’1” did not return any valid instances. Please check to see if this is a valid WMI Query.. Invalid class

I’ve had success with the below solution:

Restart your SCOM Agent on the server.

Recently I had to move our OperationsManager database to a different server as part of testing a disaster recovery plan. While the Microsoft procedure for this (http://technet.microsoft.com/en-us/library/hh278848.aspx) is quite in-depth there is something to be aware of if you upgraded your environment from SCOM 2007.

Update the operational database with the new database server name.

This article is about an issue experienced with SCOM SMS notifications after upgrading from SCOM 2007 R2 to SCOM 2012. If you are looking for how to setup SMS notifications in SCOM in general I’d recommend this great article by Jeremy Pavleck (http://www.pavleck.net/2009/04/configuring-sms-in-opsmgr/)

We use a GSM modem in order to send alerts via SMS to our engineers. After upgrading to SCOM 2012 however this method stopped working and we started getting the following alert in the console.

This was quite strange as testing with the modem software, it was possible to successfully send a test SMS.

As it turns out the issues lies with the Notification Resource Pool, in order to get SCOM to successfully send SMSs again I had to switch the  resource pool to manual membership and remove all management servers from the pool with the exception of the one with the modem attached. Now everything is working again.

During our SCOM 2012 upgrade I came across some 2007 agents would not upgrade to 2012 due to being unable to complete the uninstall portion of the agent installer.

Errors we experienced  included corrupt MSIEXEC packages and a rollback of the 2012 agent upgrade with the message “unable to install performance counters.”

After attempting manually uninstalling from Add / Remove programs as well as the SCOM 2007 removal tool with no success we came across a tool called MSIZAP. (Thanks to Jonathan Almquist for his great blog post pointing us in the right direction)

The following process will allow you to remove the SCOM agent from your servers which will in turn allow you to install your new 2012 agent:
As always backup your registry before attempting any process that makes changes to it.

With the Uninstall key highlighted, click on Edit > Find, and look for the string System Center Operations Manager.  Open the UninstallString string value, and copy the GUID.  Include the squiggly brackets. 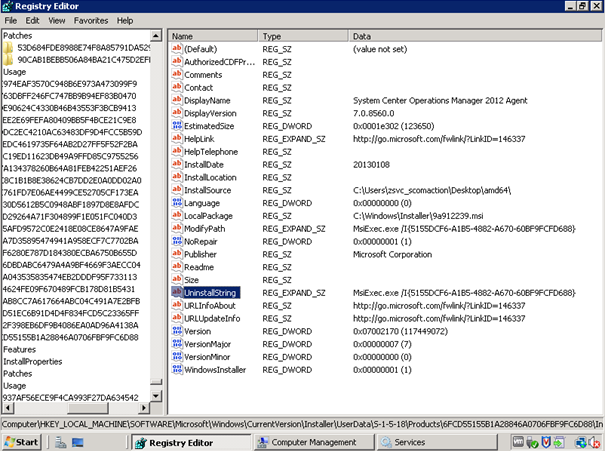 3. Open an elevated command prompt and run the program as follows:

Wait until this process has completed..

4. Delete the SCOM program files, usually located under “%ProgramFiles%\System Center Operations Manager 2007”. Some files may be locked those can be ignored.

5. Open the registry, search for the Management Group name

6. Delete the Microsoft Operations Manager key that the management group name is part of

7.Open the registry and navigate to:

You will now be able to install your agent manually or with your console.

The link below is an extremely useful article when is comes to troubleshooting your Unix / Linux discoveries with SCOM 2012.

Something I came across which I did not see in this article, you might get the following error during your discovery:

If this happens all you need to do is restart your SCOM services on the management server that is running your discovery, it will then complete.